Plenty of inspiration for the SNV standardization experts

The second SNV event to mark its centenary was all about the experts of the standards committees. They are a key pillar in the standardization process and with their expertise, they make an important contribution towards tackling the major challenges of today, such as digitalization, climate change, the energy revolution and sociopolitical issues. Look back at the exciting and inspiring afternoon of 25 September 2019 in our image gallery.

Around 150 standardization experts accepted the SNV’s invitation. They were welcomed at Technorama in Winterthur by Robert P. Hilty, representative of the SNV Board, Marcel Knecht, Head of Standardization at the SNV, and the SNV employees and then taken on five different guided tours of companies.
The individual groups were full of enthusiasm when they reassembled at Technorama to share their experiences and to network. On their guided tours, the experts were taken to Stadler Winterthur AG’s competence centre for bogies and to the company Burckhardt Compression AG, the global market leader in the field of reciprocating compressors. Another group got to watch a rope being manufactured at Seilerei Kislig, while the participants on the fourth tour were given an insight into everyday work at the recycling company Maag Recycling AG. Those who had signed up for the guided tour of Winterthur heard exciting stories about the development of commerce in Winterthur from the Roman era right through to the present day.

As the highpoint of the event, the standardization experts were told all about the background of the JPEG format by the Chairman of the JPEG standards committee, Professor Touradj Ebrahimi of the Swiss Federal Institute of Technology Lausanne (EPFL). There is probably no other media format that has been as successful as the JPEG. The experts behind the standard for JPEG were recognized with an Engineering Emmy by the US Academy of Television Arts & Sciences at the 71st Engineering Emmy Awards on 23 of october 2019.

After that, Switzerland’s most famous paraglider, Chrigel Maurer, surprised the guests with his thrilling multimedia show on the Red Bull X-Alps 2019 race, which he was able to win for the sixth time. The «Eagle of Adelboden», as he is sometimes nicknamed, stressed on various occasions the importance of the expertise he has built up over his career and continues to develop in collaboration with various renowned companies. A factor as small as the weight of his clothing, helmet and rucksack determines his success or failure in races, he pointed out.

Finally, everyone was invited to a drinks reception in the atrium of Technorama.

We would like to take this opportunity to once again thank all the Swiss experts who have helped to shape the process of standardization around the world with their untiring, long-term commitment over the decades, and by doing so have made a vital contribution to both sustainability and innovation.

Image gallery from the standardization expert event on 25 September 2019 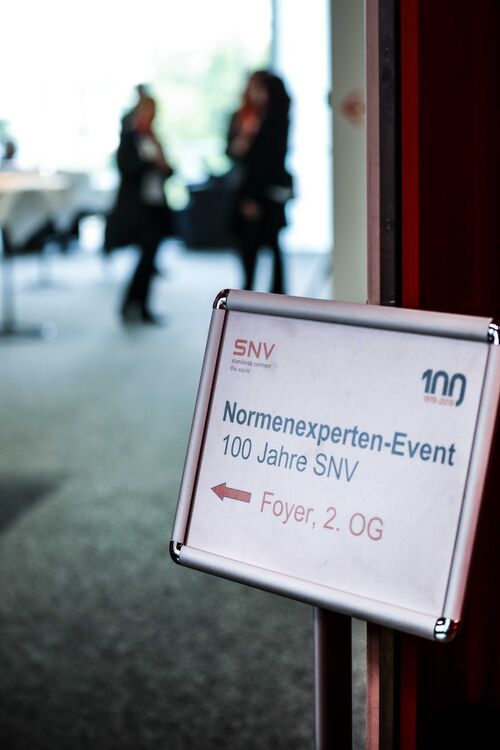 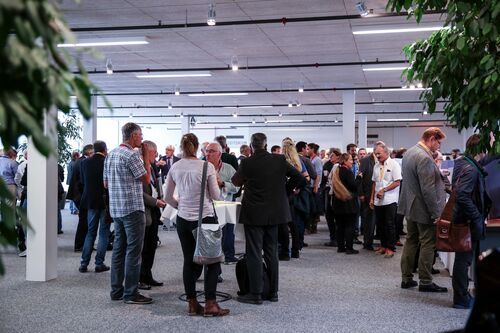 The arrival of the experts

The SNV welcomed the experts at Technorama in Winterthur. 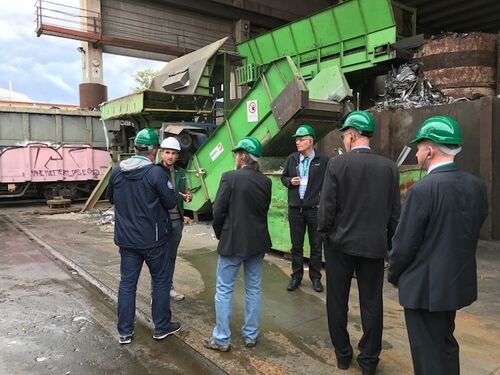 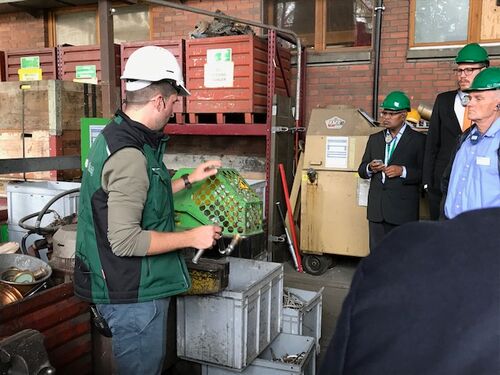 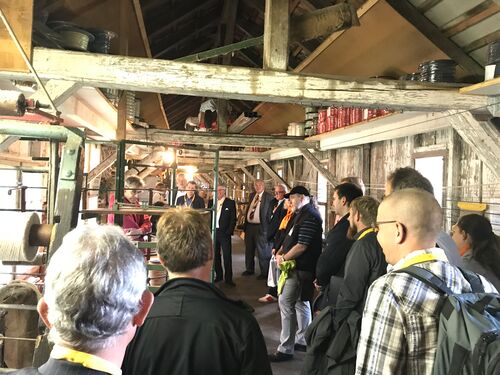 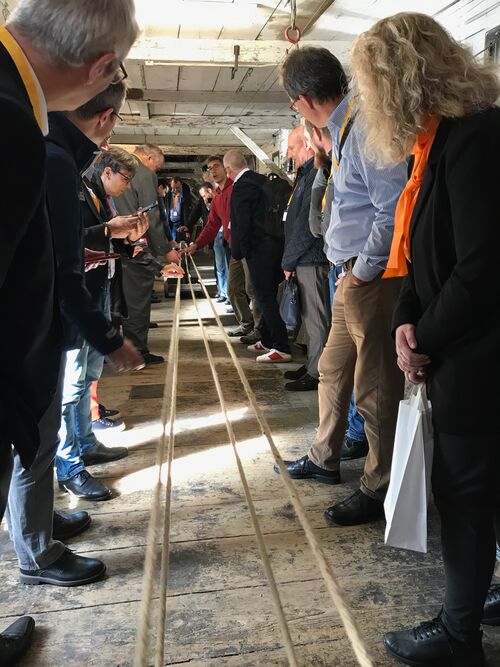 The tour participants got to watch a rope being manufactured. 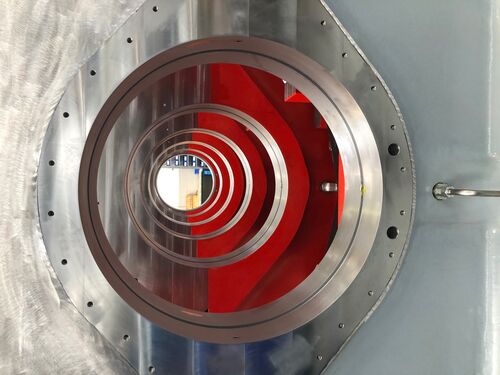 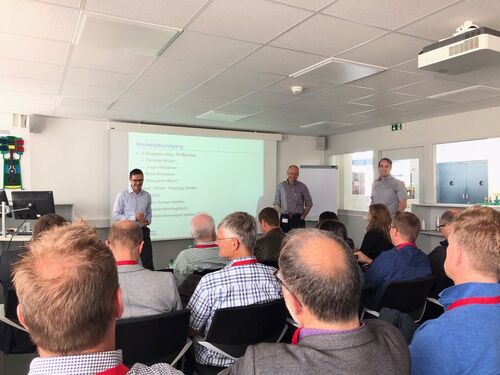 Start of the tour of Burkhardt Compression AG 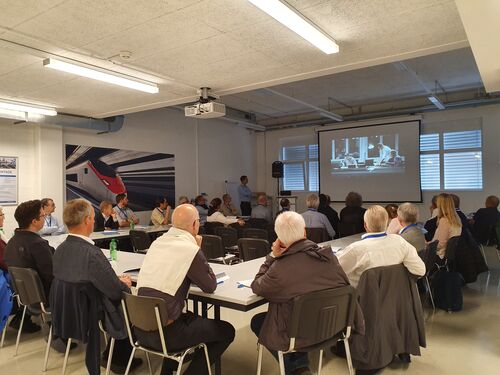 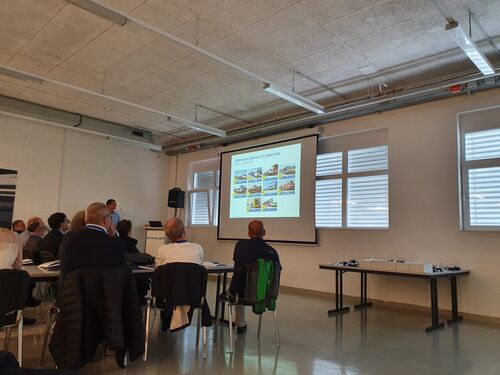 Introductory video on the guided tour of Stadler Winterthur AG 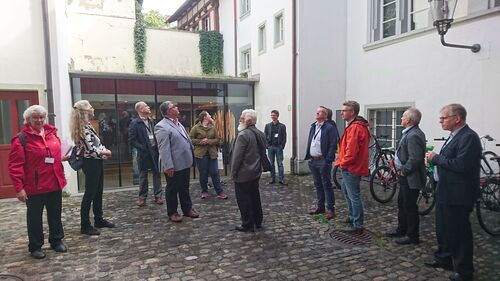 Guided tour of Winterthur: commerce then and now. 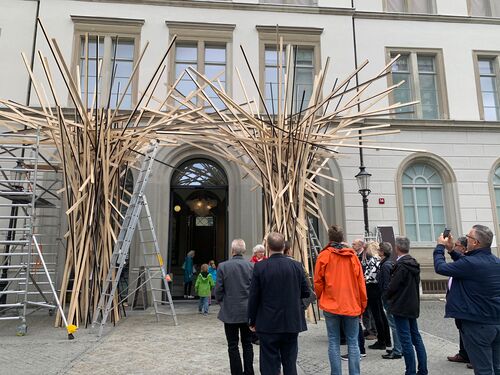 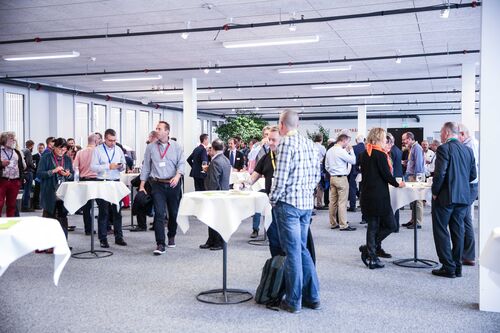 Chatting after the guided tours

The guests had a lot to tell each other after the inspiring guided tours. 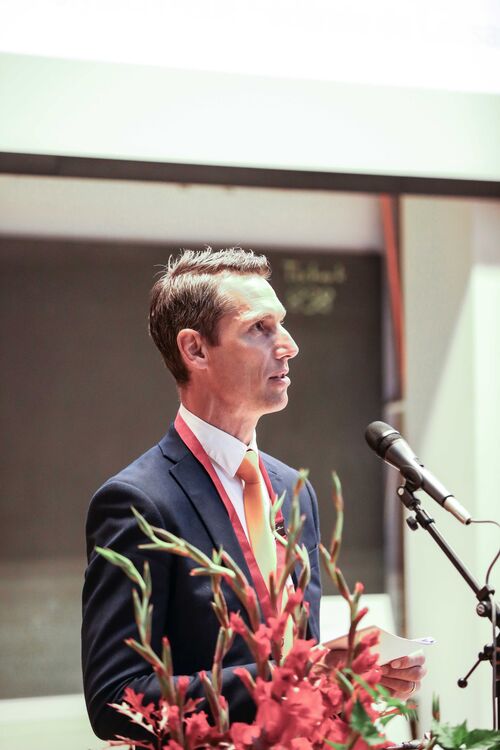 Marcel Knecht, Head of Standardization at the SNV, praised the work of the standardization experts and welcomed Professor Touradj Ebrahimi.

Professor Touradj Ebrahimi spoke about the importance of the media format JPEG. 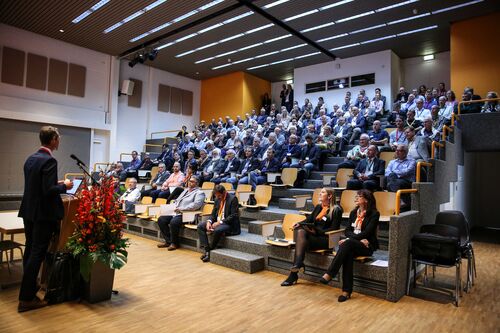 The guests listened intently to the surprise guest. 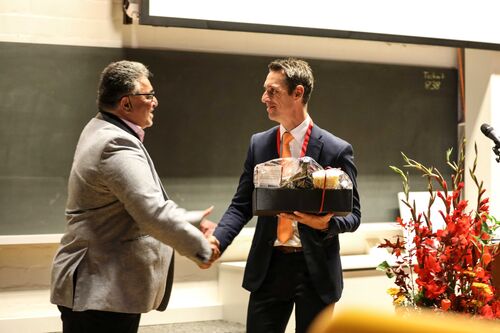 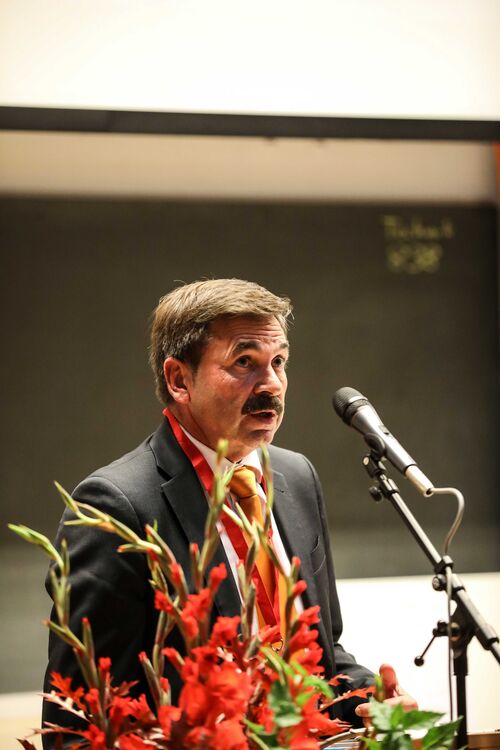 Urs Fischer, CEO of the SNV

Urs Fischer, CEO of the SNV, welcomed the standardization experts in attendance and announced the surprise guest. 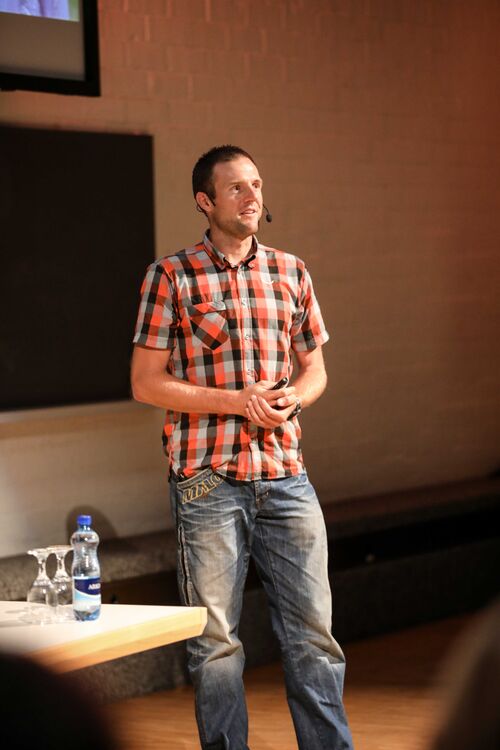 The «Eagle of Adelboden» surprised the guests with a thrilling multimedia show. 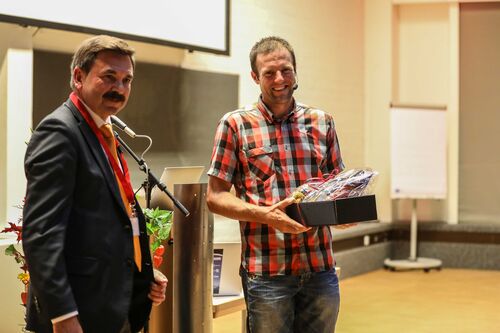 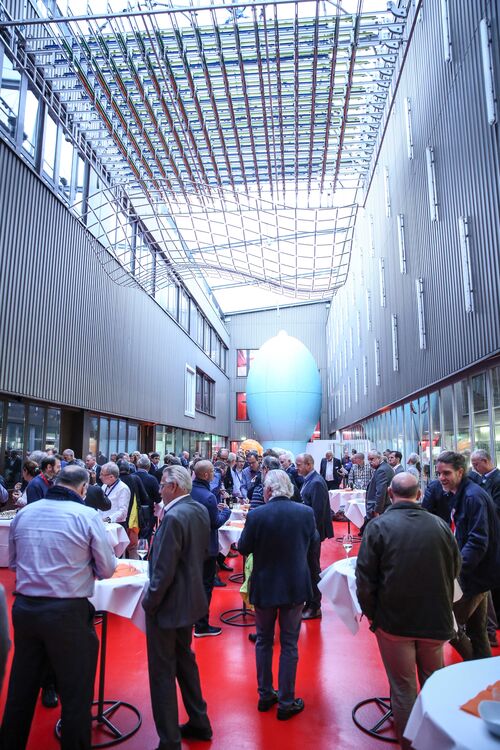 Drinks reception in the atrium of Technorama

The SNV then invited all the guests to a lavish drinks reception. 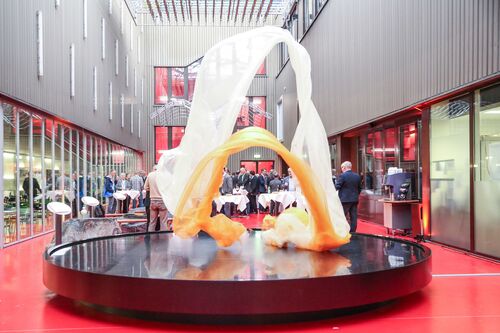 SNV-coloured cloths blowing in the wind 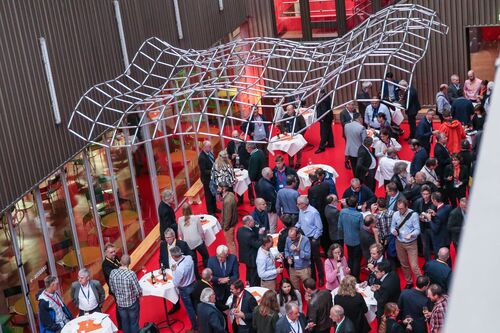 The dynamic net above the guests’ heads motivated them to start networking. 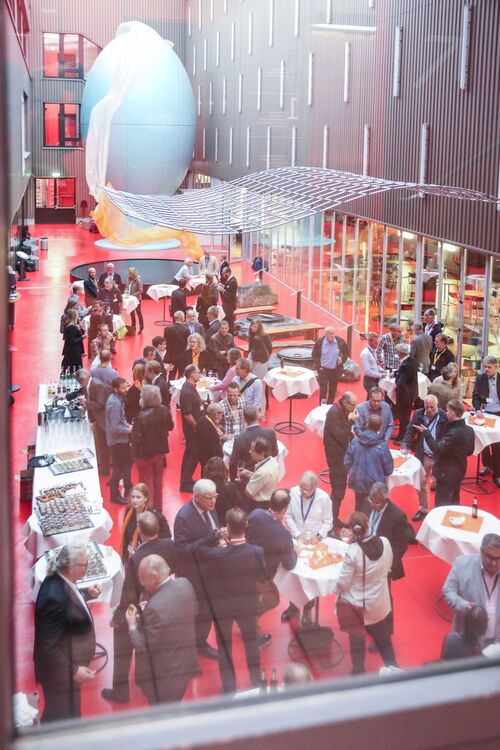 A view of the atrium

Conversation between the guests was lively.