Still ready for the future after 100 years

To celebrate its centenary, the Swiss Association for Standardization (SNV) treated the 200 or so guests present with risotto, hamburgers, Indian rice dishes and various other culinary delicacies from across the globe. The rich variety of food that was served at the Trafohalle in Baden reflects the rich variety of subjects that the SNV deals with. Guests at the centenary celebrations on 23 May 2019 also got to try out these subjects in small morsels.

Standards connect the world. These were the words with which Dr Jürg Werner, Chairman of the SNV Board, welcomed the guests to the anniversary celebrations, pointing out how relevant standards are in this globally networked world. Stefan Ramseier, Head of the research centre situated just around the corner in Baden-Dättwil, gave a welcome speech on behalf of ABB. After all, it was the former Brown, Boveri & Cie (BBC) corporation that founded the Swiss Standards Federation together with other Swiss industrial companies such as Sulzer and Escher-Wyss on 2 July 1919. Ramseier quoted an edition of the publication Bauzeitung from 1919 that described standards not as something rigid but as “a well-considered product of experience and requirements” – a fact that continues to apply to this day. Urs Fischer, CEO of the SNV, then emphasized how visionary the establishment of the SNV was, comparable to the foundation of its exact contemporary circus Knie. Both continue to contribute to society and move forward in their own way to this day, he said – something which was also expressed in the anniversary celebrations.

Movement is the order of the day
Next up, guests were treated to a dynamic performance by Prague light artist Alex Dowis. Further on, in another room, the audience members believed that they were going to be part of a virtual performance as only the voice of the speaker was audible at first. After that, a drone guided them to the large hall, where everything went dark again and Alex Dowis gave a poetic and magical depiction of the time from 1919 to 2019 by drawing on a large wall with a light pen. New light paintings were created over the constantly fading images, sometimes with precise strokes and dots, sometimes with blurred and ethereal effects. The final ephemeral artwork brought the audience back to Baden of the immediate present, which was firstly made apparent by the image of the church and then by the depiction of two people clinking glasses to celebrate 100 years of the SNV at the Trafohalle.

Four subject morsels point the way to the future
Matthias Jungen from Swisscom showed the guests present in credible fashion that augmented reality, robotics, the Internet of things and automated driving basically already depended on 5G technology. After all, not only does 5G provide more capacity and higher speeds than the current 4G systems – it is also a requirement for the proper functioning of such future applications. The expert explained that the new technology would make it possible to operate self-contained mobile networks within a network by separating off part of it. As a result, the devices and communication tools involved could communicate without disturbances, something which 4G does not guarantee.

Jean-Philippe Hagmann, author of the book Hört auf, Innovationstheater zu spielen! (Stop playing innovation theatre!) put forward the provocative theory that when it comes to innovation, the idea itself is not actually worth that much. To be successful, innovation processes require other players than just the people who generate the ideas. The most important role, according to Hagmann, is that of bridge-builder between those who develop new ideas and those who maintain day-to-day operations. Company culture also has to be right, he added. Once an innovation process has been set in motion, everyone involved needs to feel secure and certain that both they as persons and the innovation process itself will be respected within the company. Hagmann gave the audience some valuable tips: goals should be outrageous and ambitious, and fun, humour and playfulness should play a bigger part in our day-to-day working lives.

A further playful contribution came from security expert Dominique Brack, who observed that the culture of safety and security often falls by the wayside to some extent in innovation-driven projects. Drones are a good example of this. Although they are already used for a wide range of purposes, effective measures to defend against drones and expertise on how to combat abuse are largely non-existent – as was shown in December 2018 when a drone brought Gatwick Airport to a standstill for three days. In London it was up to marksmen, and in Baden two audience members, who are experienced shooters, were given toy guns and tasked with shooting down a drone. All their attempts were in vain, making it clear without any further explanation that different weapons are needed to defend against drones.

To conclude, Andreas Hufschmid and Adrian Wachholz presented two innovations developed by ABB. The robot YuMi is designed for repetitive tasks in a variety of fields. Unlike traditional industrial robots, which had to be enclosed in protective fences, it can work directly with humans. The fast charging station with three different charging capacities is also focused on the needs of the users. According to Wachholz, the rise of electromobility shows that established sectors such as the automotive industry suddenly have to think about new issues and competitors as well.

Moving forward with vigour
The four subject morsels showed clearly that the world is changing. Old things are being replaced; new ones are emerging. Both the SNV and circus Knie have confronted the changing world for 100 years. To mark its anniversary, circus Knie treated itself to a new tent – the SNV to new offices, a new strategy and a new corporate design, a modern logo and an innovative website. It is now ready to continue addressing the standardization issues of the future and adapting to new developments and requirements – as already described in 1919.

Image gallery for the SNV centenary celebrations of 23 May 2019 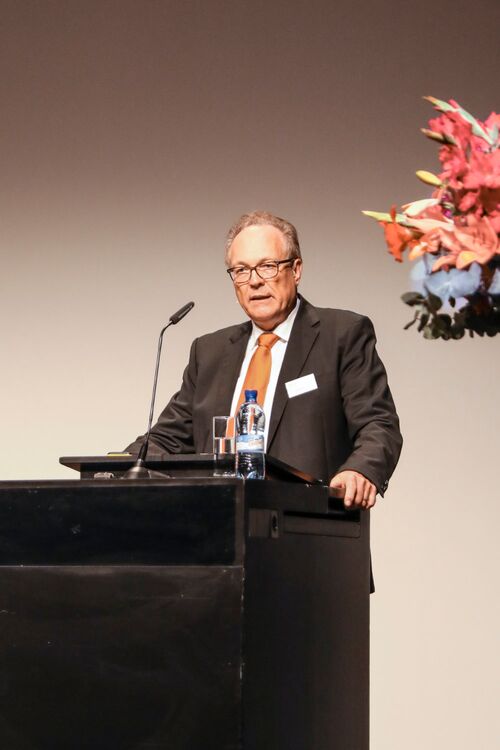 Dr Jürg Werner, Chairman of the SNV Board

The Chairman of the SNV Board, Dr Jürg Werner, opened the anniversary celebrations. 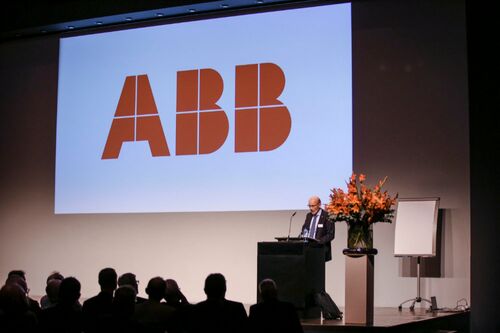 Once the anniversary celebrations had been opened, Stefan Ramseier welcomed the guests on behalf of ABB. 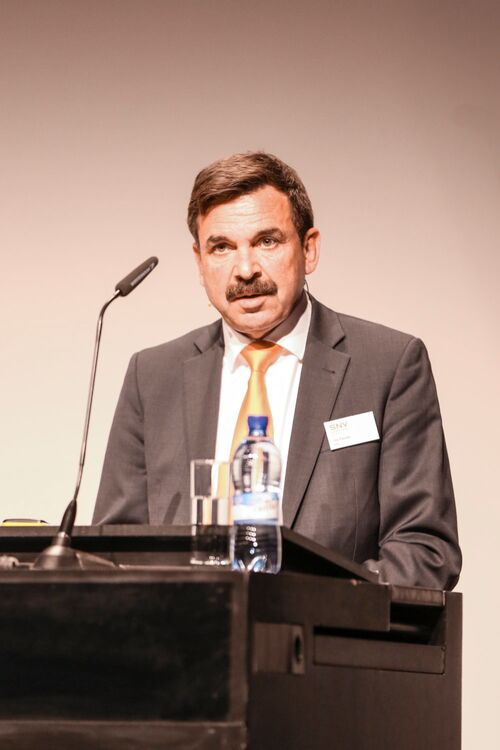 Urs Fischer, CEO of the SNV

Urs Fischer welcomed the guests at the Trafohalle. 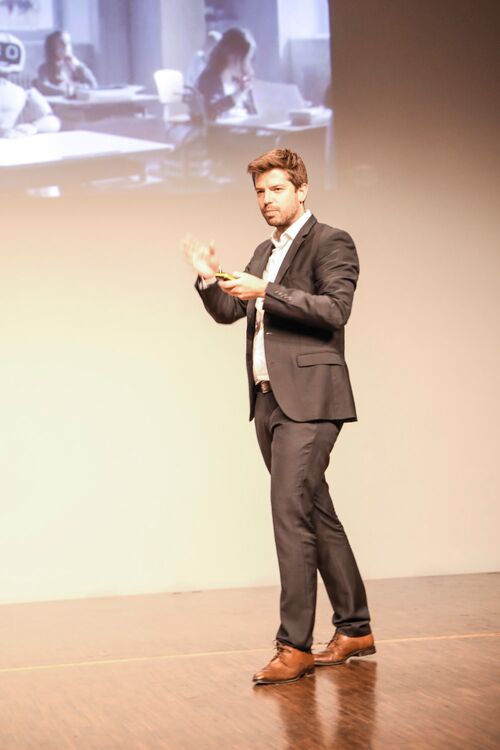 5G Inspiration Session: Matthias Jungen gave an introduction to the subject of 5G. 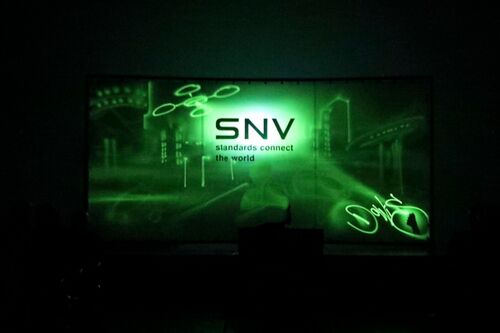 The light artist from Prague amazed the guests of the SNV. 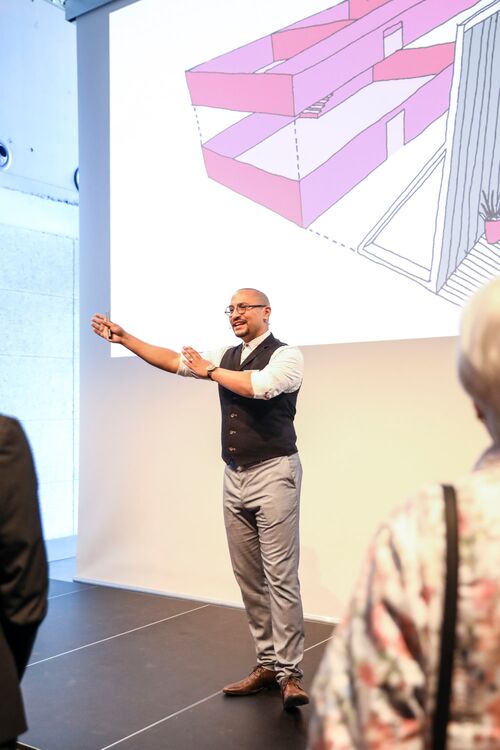 The speaker and author of the book Hört auf, Innovationstheater zu spielen! (Stop playing innovation theatre!) impressed the guests from the very outset in his Innovation Inspiration Session. 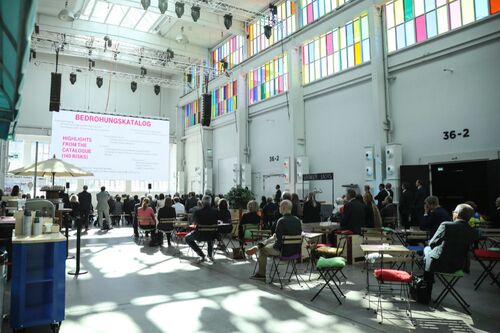 The Drone Inspiration Session was held in the Trafo’s impressive hall 37. Dominique Brack picked up the guests by drone in the Glassaal hall and showed them the way to the large industrial hall. 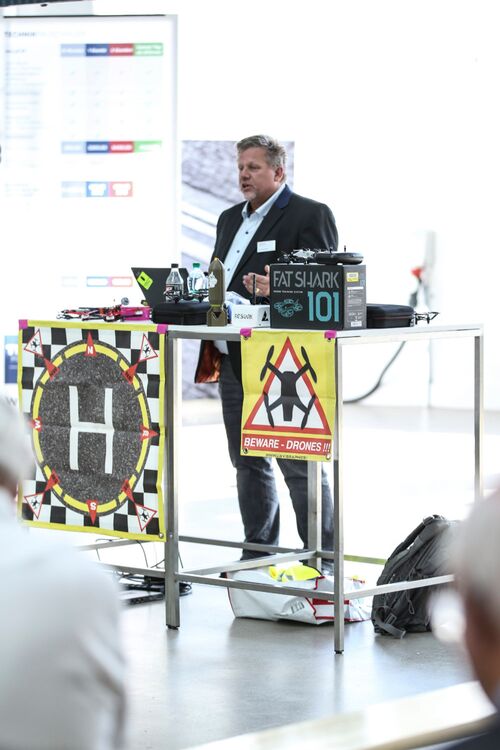 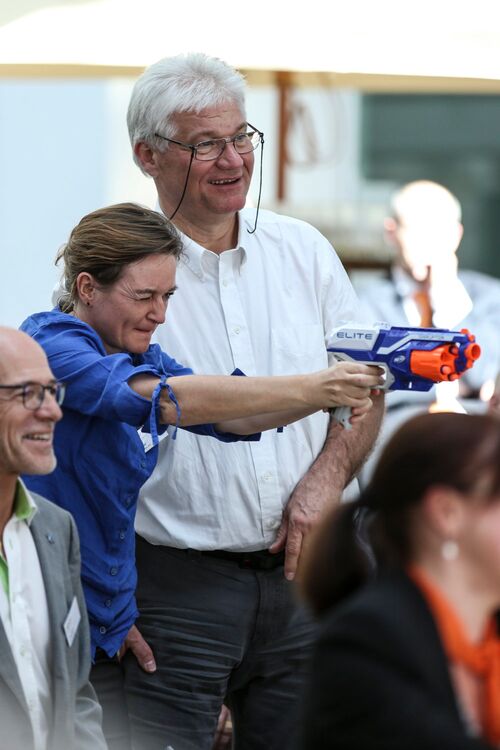 Guests from the audience playfully tried to put up a defence against the drones, but their efforts were in vain. 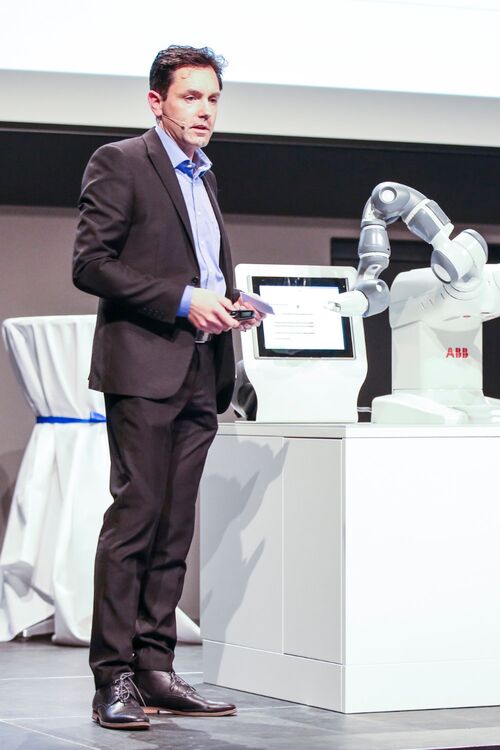 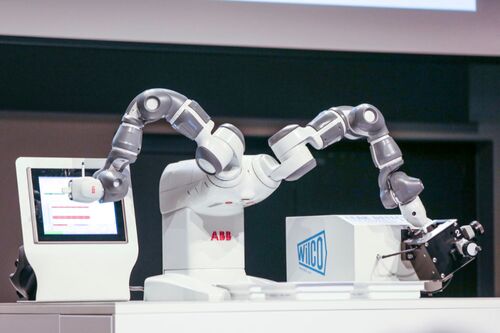 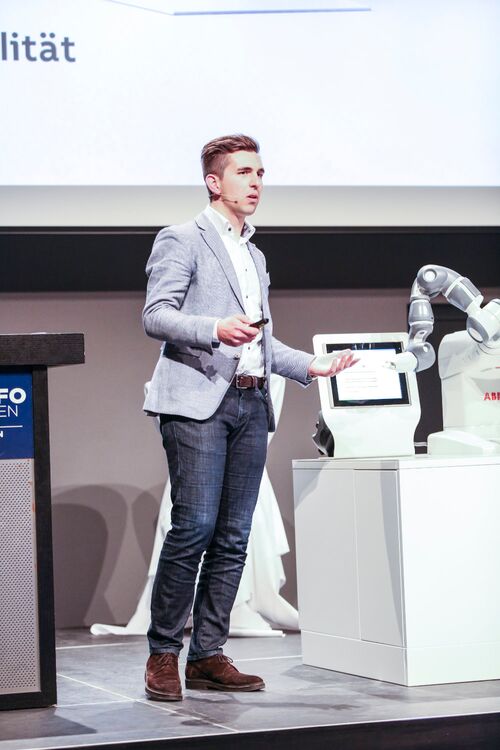 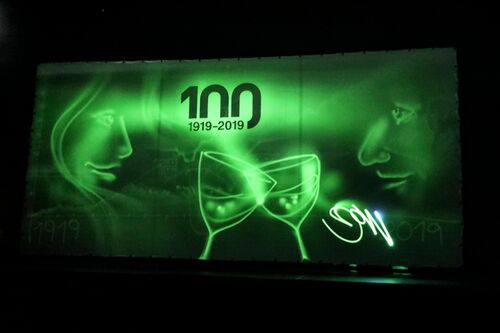 Alex Dowis conjured up mystical light images with his light pen before ending his performance by ushering in the drinks reception. 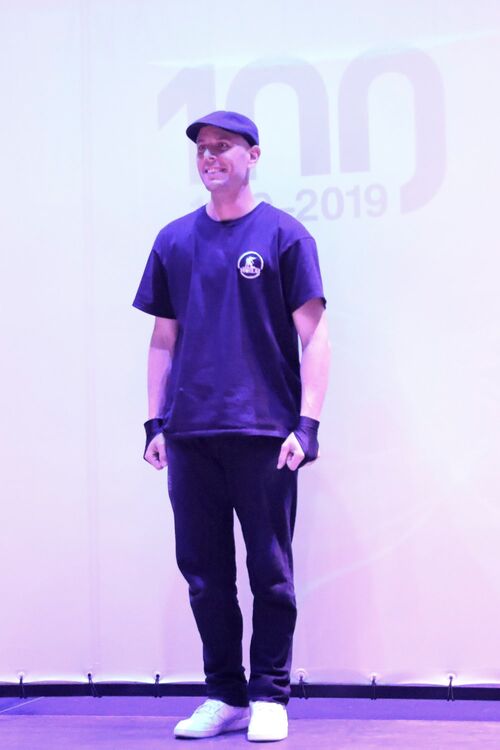 The light artist from Prague earned a rapturous, seemingly never-ending round of applause. 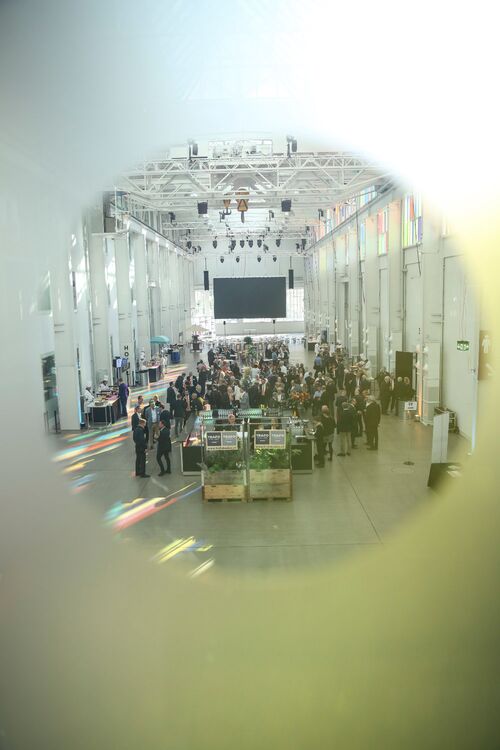 Drinks reception at the anniversary celebrations

The drinks reception was held in the large hall 37. 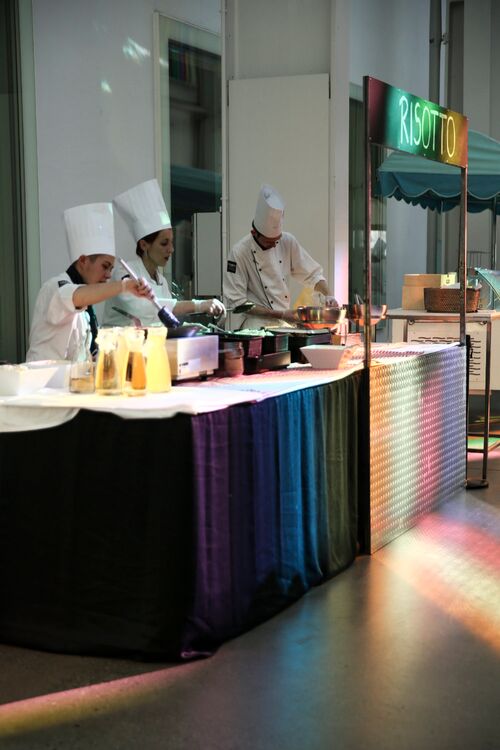 To close the event, guests were treated to a food festival. 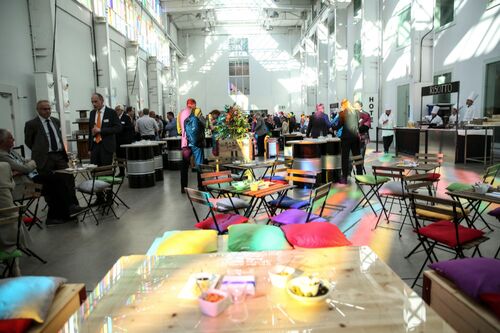 As the rays of the glorious evening sun shone through the coloured windows of hall 37, guests enjoyed the drinks reception and the food festival at the various stands.