Balthasar is Switzerland’s largest manufacturer and distributor of candles. Everything started in 1939, when the company was founded as a cosmetics producer selling eau de cologne and hair tonic. Back then, its founder, Theo Balthasar, personally collected the birch sap for his well-known birch hair tonic. As demand for additional products, such as lipsticks, nail varnishes, powders, creams, bath salts and shampoos, grew, so did the catalogue. Back to candles: Balthasar is a long-standing member of the SNV Swiss Association for Standardization. One of the purposes of standardization work is to ensure that the candles meet all relevant safety requirements.

Widely available, little known
After the war, Migros founder Gottlieb Duttweiler personally knocked on Balthasar’s door to ask if he would consider producing candles for him. His calculation was simple: cosmetics use paraffin, candles use paraffin, how hard could it be? Balthasar knew the ingredient well, but he had no knowledge about candles. Still, Duttweiler’s offer was too tempting to refuse. The two sealed their deal, and Duttweiler gave the company a few months to supply the high-quality candles he had ordered. Balthasar was lucky: a candle factory in Central Switzerland had just declared bankruptcy, and he was able to take over its infrastructure and an expert plant manager right away. Candle production took off soon, and Balthasar remains Switzerland’s largest manufacturer and distributor of candles to this day. It supplies all major retailers with private-label or own-brand products. How do consumers know whether a private-label product is a Balthasar candle? «Look for the words ‘Swiss-Made’ and the RAL label – that’s the quality only Balthasar delivers,» explains Alain Balthasar.

A feel-good by-product
Paraffin sludge is a by-product of the crude-oil production process. Reducing the oil content of the sludge further produces slack wax, which is then refined to obtain paraffin and paraffin oils for use in high-quality lubricants and Vaseline. Paraffin is a perfect raw material for candle-making. It is flammable, odourless, flavourless, non-toxic and water-repellent and has many other useful properties. Due to an ongoing paraffin shortage, prices have skyrocketed as of late. Any decline in the production of fuels and, in particular, kerosene for the aerospace industry inevitably results in a lack of the by-products normally derived from the process. Palm oil, soya, rapeseed oil and food waste are possible alternatives. Each substance has its advantages and disadvantages. Alain Balthasar proudly explains: «Our product line Balthasar Green uses 100 per cent natural stearin, which is primarily made from naturally renewable raw materials. All candles in the Balthasar Green line carry the sought-after Nordic Ecolabel. It certifies compliance with strict requirements regarding raw materials, quality and ecological guidelines. And because our candles are produced with renewable energy, they also carry the Green Energy label.»

A burning passion for quality
Today, Balthasar only produces 25 per cent of all candles sold in Switzerland from its headquarters in Hochdorf in the canton of Lucerne. This is profitable thanks to a high degree of automation, and it gives the company a great deal of flexibility, allowing Balthasar to respond to colour trends or individual wishes from retailers rapidly. Every year, around 20 million candles leave the factory – more than five candles for each private household in Switzerland. The partner company in the Czech Republic, which produces its goods nearly exclusively for Balthasar, adds impressive figures to the equation. All candles, whether they were produced by Balthasar or its external partner, undergo strict in-house controls to ensure compliance with the quality standards. Interestingly, a candle is always a combination of the wax and the wick. A wick is more than just a piece of string: it is made of asymmetrically braided cotton, it needs to bend optimally during the combustion process, and it is treated with various salts during production. Strictly speaking, its job is not to burn, but to regulate paraffin transport. The production formula is as much of a secret as the recipe of Coca-Cola: only two or three people know any one company’s secret. 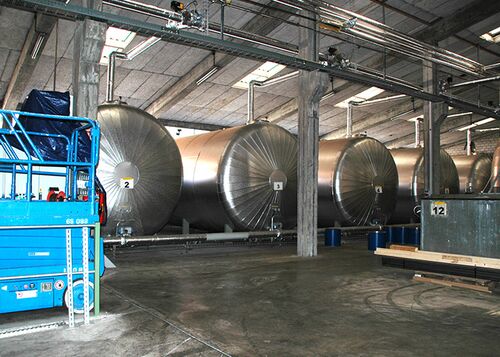 Paraffin is stored in tanks and kept at an even temperature. 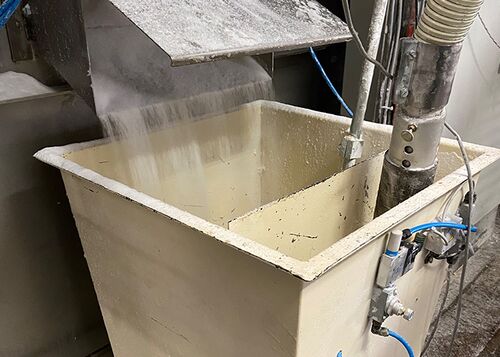 The paraffin is processed into a granulate, which can be pressed into the desired form and dyed later. 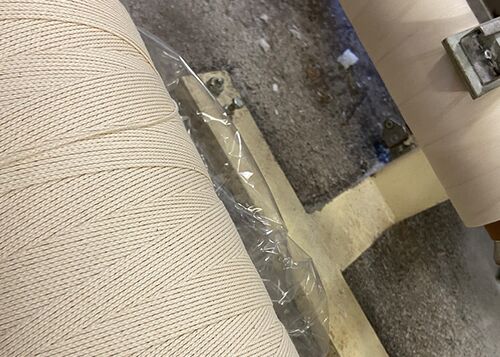 All wick producers have their secret formulas. Balthasar works with several German manufacturers.

The RAL logo and the icons
Unlike their counterparts in the European Union, Swiss candle manufacturers are not unionized. That is why Balthasar, a member of the SNV, is directly involved in the work of the technical committee. Its RAL seal of quality originated in Germany, as the RAL guidelines provided an excellent basis for developing the European standards. The individual member states participate in specific areas to various extents. France and Italy are very active in the field of scented candles, while the Scandinavian countries and Germany play a prominent role in other areas. The RAL standards govern three main aspects of a candle: its appearance, labelling and sooting behaviour. «Don’t forget that selling a candle essentially means selling an open flame,» Dominik Durka reminds us, emphasizing the importance of standards. Have you ever had a closer look at the information presented on candle packaging? A collection of icons efficiently communicate user instructions and hazard warnings: never leave the candle burning unattended, leave a minimum distance between two candles, cut the wick to a specific height, use a specific candleholder and so on. There is a separate group within the committee that is dedicated to these icons. The standards are far from rigid, however. They are continually adapted to practice, as the example of tea lights shows. A while ago, a few resourceful producers attempted to reduce their production costs and increase their profit margin through a range of tricks. This resulted in tea lights with measly flames and consumer complaints. The standards agency intervened, and today, candle flames must be at least 14 millimetres tall. Tea lights come in three qualities: the highest quality also generates sufficient heat to melt cheese in a small raclette oven or keep dishes hot at restaurants. «Out of every production run or externally procured batch, we put three candles through rigorous tests. This helps us ensure that we always supply our retailers with goods of the highest quality. In addition, an independent RAL auditor from DEKRA in Stuttgart comes to examine our products every year. We are only granted the RAL seal of quality for another year if their visit is satisfactory,» says Dominik Durka. 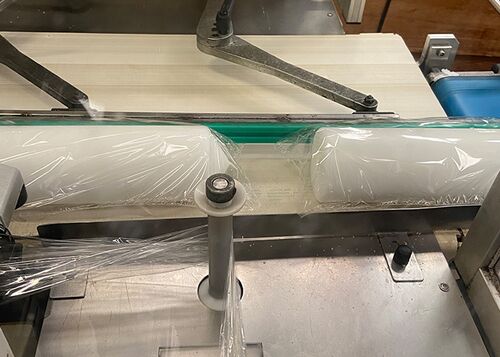 A packaging station for protecting the candles. 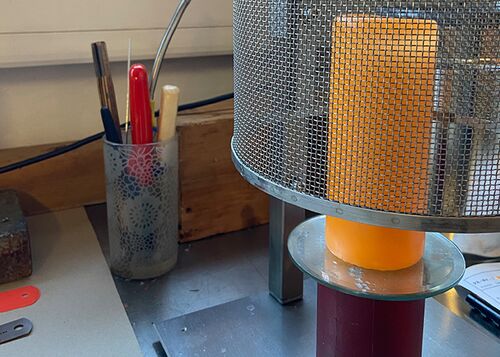 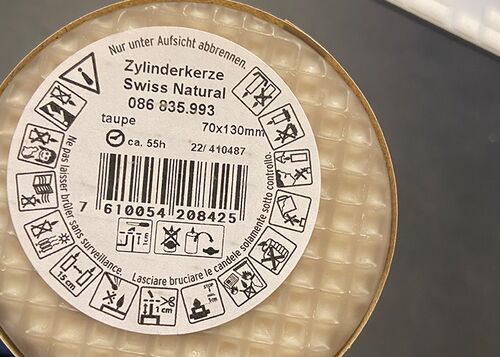 A collection of icons communicate important warnings and user information.

A country of candle lovers
Candles are culturally important in Switzerland. «Candles illuminate our entire lives, from the cradle to the grave,» explains Alain Balthasar. «In the past, candles used to be a necessity, and there was no specific word for them. They were just called ‘lights’.» The paraffin candles we know today have been around since 1850. Switzerland regularly ranks among the top five consumers of candles in Europe. Cultural differences in the use of candles regularly spark conversations in the standardization committee. Take the debate about the ideal aftersmoke time, for example: Germany believes that 5 to 10 seconds are sufficient, but France – a great connoisseur of scented candles – thinks it should be 20 seconds. Like in any standardization committee, defining the best standards requires negotiation skills and pragmatism.
Today, around 10 candle manufacturers operate in Switzerland. Many of them are, rather unsurprisingly, located in cantons with a strong religious history. But candles are not just associated with religious moments, they also have a place in the day-to-day: we use them during baptisms, birthdays, Christmas, parties, weddings and on graves. «We make an emotional product that is not only useful to our customers in a wide range of situations, it also adds a special touch to memorable private moments and creates a cosy atmosphere wherever it is used,» points out Alain Balthasar with a smile.

Traditional white and red
Switzerland’s candle consumption peaks on Advent Sunday, when many households need four matching candles. Have you picked your colour yet? «Trends come and go, but the traditional white and red candles remain extremely popular with the Swiss. Dusty pink is currently en vogue.» However you plan to decorate your home this year, Balthasar offers dozens of colours, and their warehouses are well stocked, ready for Christmas. 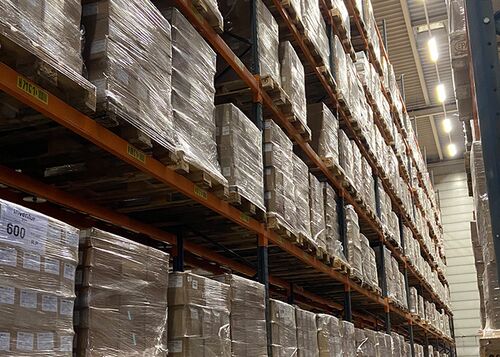 The warehouses are well stocked to meet demands during Christmas. 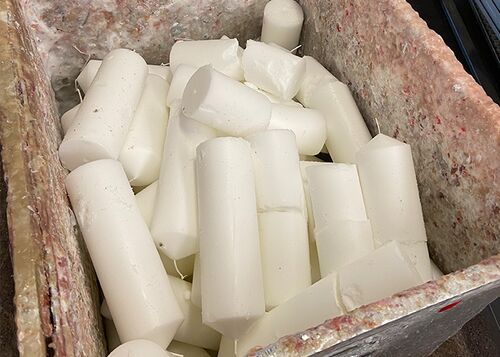 Candle residue is melted again or turned into firelighters. 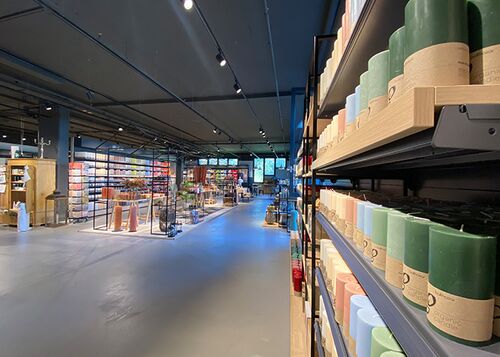 The flagship outlet in Hochdorf, where candle-related homeware is available alongside Balthasar’s own candles.

Expert tips for the Christmas season

If you want your candle to burn down beautifully, there are two important factors to bear in mind:

Founded in 1939, Balthasar employs around 80 staff and produces homeware. Its core competency is the production of high-quality candles: 2500 tonnes leave its production site in Hochdorf every year to be sold by Swiss retailers. The traditional company from the Seetal leads its sector in Switzerland and is run by the third generation of the founding family. Since the autumn of 2020, Balthasar products are available from the company’s 500-square-metre outlet in Hochdorf and online from balthasar.ch .

Alain Balthasar, member of executive management and the board of directors – CEO of Balthasar + Co. AG

Alain Balthasar completed a degree in business studies at the University of Fribourg before working as a regional sales manager for ALDI Suisse. Today, he is the father of twins and the CEO of Balthasar + Co. AG, leading the company in the third generation. Albeit steeped in tradition, the company supports modern approaches to working, and Alain Balthasar insists on spending every Friday afternoon with his twins. His motto: «stagnation equals regression». 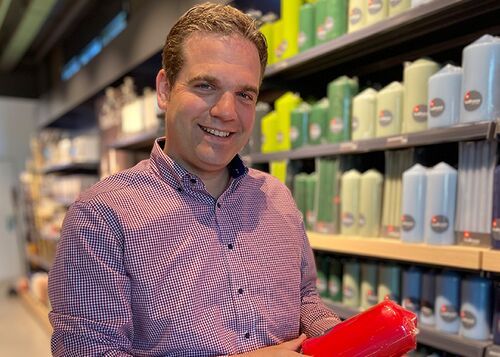 Member of executive management and the board of directors – CEO of Balthasar + Co. AG

Dominik Durka is responsible for the quality of Balthasar products. He holds a chemistry degree and joined Balthasar more than a decade ago after working for SR Technics. He is fascinated with the wide variety of work that goes into candle-making and always strives for the highest-possible quality with his team at the competence centre.