The most important institution in matters of mobility

TCS is seen as the ultimate Swiss institution when it comes to mobility. The organization has been dealing with issues related to moving people for 125 years. Nearly every adult knows that they can call TCS if their vehicle breaks down and that the vehicle test ratings of TCS can be relied on. Consumers in the media throughout Switzerland consider its independent testing reports of vehicles, tyres and child seats a reliable and convincing source of information. In this article, we would like to show why the TCS test team comes into contact with standards practically every day.

The TCS Test Lab is operated by the mobility consultancy in Schönbühl BE, where there is space and infrastructure to design and carry out vehicle, component and product tests. At this facility, they set up tests of new technologies and vehicles, of energy storage devices, and of the consumption and range of two-wheeled vehicles and cars, broadening the horizons of conventional vehicle testing.

Standards as the basis for the TCS Test Lab
Standards are a vital basis for test laboratories, allowing them to base their testing on uniform and generally applicable requirements. This is also the case at TCS, as confirmed by Erich Schwizer, Expert Mobility Advisor at the TCS Test Lab. The majority of the mobility tests are carried out at the TCS Test Lab in Ittigen, which in 2020 underwent a refurbishment that is very much appreciated by every laboratory employee. There it is possible to prepare and evaluate nearly every conceivable study – from testing electric bicycles, drones and passenger cars to measurement of ultra-fine particulate matter in exhaust gases.

Tests are prepared or conducted in the test lab nearly every day, with the test team first doing the groundwork in the run-up to each test. The tests are practically always based on the existing standards from the related area, such as SN EN 15194 for e-trekking bikes, because such standards ensure that the fundamental requirements are chosen in a uniform manner. Depending on the test objective and the test object, Erich Schwizer and his team colleagues then decide what additional criteria are to be tested.

Annual child seat test
He explains the process using the example of the highly regarded child seat test, which has been carried out by TCS each year since 1968 and always garners a great deal of attention in Switzerland. After all, young parents only want the best for their children, making it understandable that they find it particularly important for their little ones to travel safely and comfortably. The task that the test team faces is thus not just about ensuring compliance with the legal requirements but also involves testing of the handling and, for example, the safety and comfort of the seats when in contact with skin. In this case, standards for testing of toxic and harmful substances come into play. These include SN EN 71-3 and SN EN 71-9+A1, “Safety of toys”, as well as SN EN ISO 14184, «Textiles - Determination of formaldehyde» . The results are published once a year; and the latest results can be found in the joint TCS and bfu guide «Auto-Kindersitze 2020» . The TCS recommendation of “excellent” or “highly recommended” is a priceless distinction for providers, something that is arguably better than any marketing promise they might make themselves. 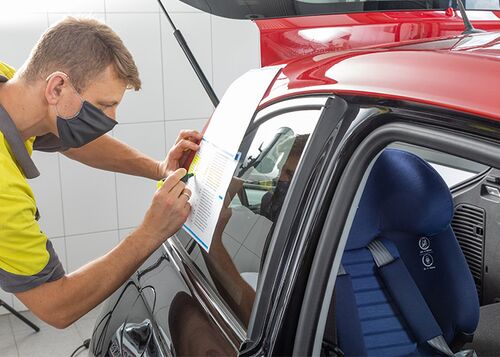 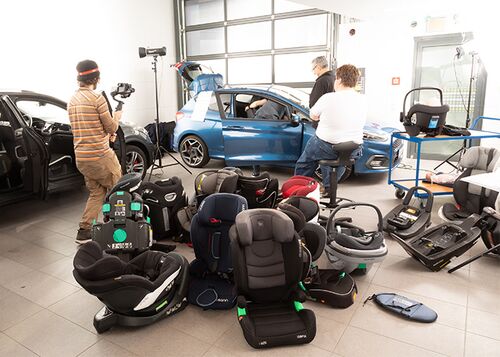 Do the child seats fit in the vehicle? 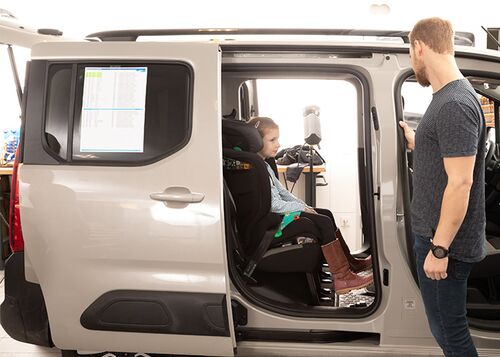 Video description: Assessment of the protective effect in the event of a head-on collision at 64 km/h using acceleration sensors and video analysis.

More and more run-flat tyres in use
Given his many years of experience with standards, we wanted to hear from Erich Schwizer whether he knows of any particular standard that he thinks should be put into effect. Without hesitation, he immediately mentioned “run-flat tyres”, because there is not yet any standard for them. Such tyres make it possible for the driver to safely drive several kilometres to the nearest workshop even after a puncture. Cars, and especially SUVs, are increasingly equipped with run-flat tyres because they eliminate the need for a spare tyre, thus freeing up valuable luggage space. But so far, the special properties of the run-flat tyre are not something you can recognize at first glance. Erich Schwizer is convinced that it would help to have a marking on the tyre that would be the same regardless of manufacturer. As the link between TCS and the Swiss Association for Standardization (SNV), it would perhaps be a good idea to now initiate a new standard? This makes particular sense because SNV members like TCS are the driving force when it comes to drafting new standards.

TCS celebrates its 125th anniversary in 2021
A rich history of serving the public interest over the course of 125 years: From the very beginning, TCS saw its primary mission in comprehensively representing the interests of its members, originally cyclists and then motorists a few years later. Throughout its history, TCS has always been confronted with road traffic problems as well as issues related to taxes to support road infrastructure. Even though the material issues with which TCS concerned itself remained basically the same, over time it became clear that TCS, in fulfilling its task of safeguarding the interests of its members, cannot only pursue “automotive” interests. As it grew, its obligation to always keep in mind not only the general interests of its members but also the interests of the Swiss public grew along with it. This meant that the services offered by the young club were both geared toward the common good and tailored to the needs of the individual members.

With this long-standing as well as future-oriented organizational philosophy of offering solutions to problems and constantly enhancing its services, TCS has been transformed from a modest cyclists’ club into the largest Swiss association of road users. Even though other means of transport are available today, barriers have been broken down and horizons have broadened, the goal has remained the same: to always be ready to serve its members as a leading consumer protection organization in the mobility sector by offering advice, protection and assistance.

Learn more in the anniversary video

Automotive engineer Erich Schwizer has been working for Touring Club Switzerland for 30 years. As an Expert Mobility Advisor, he is responsible for matters including the conducting of countless tests commissioned by TCS itself as well as by third parties. Every day, he and the eight colleagues on his team discuss topics and evaluate products. They always have a set of standards at their side, as they are an important basis for their work.